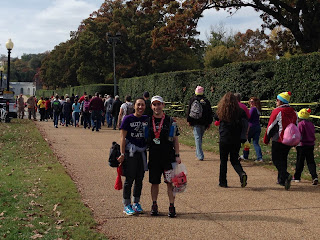 The Backstory: I don't have much history running marathons. I ran my first in 2013--the Delaware and Lehigh Heritage Marathon--and although I finished, it was pretty ugly. I battled some sharp knee pain during the second half, which really slowed me down, and my time was a sluggish 4:45. Last year, rather than adjust my training and try again, I decided to go bigger, and ran a 50k, with a similar result--lots of pain, and a very slow finishing time (6:14).

This year, one of my goals was to get more comfortable with marathon distance. In March, I ran a trail marathon at Blue Marsh (sloooowwww: 5:31), and then in April, I ran from my former residence in Phoenixville to Philadelphia in about 4:42. In both instances, my pace dramatically fell off after 20 miles.

Over the summer, after moving back to Reading, I did a lot of elevation work in order to get ready for another trail marathon--the Megatransect in Lock Haven, PA. That race was incredibly challenging, but after finishing it in reasonable shape, I hoped that a flat, road marathon would seem relatively easy. In September, I started doing some speed work, following a Hal Higdon training plan, aiming for a sub-4 time, with a 9:00/mile race pace. All the training runs were pretty easy, coming off what I'd been doing all summer, but I was still concerned about being able to maintain the race pace after 20 miles.

Getting There: My in-laws live in the Maryland suburbs of D.C., so Yuriko and I were planning on spending the weekend of the race with them. She, however, had to work a few hours on Saturday, so we weren't able to leave until after 2pm the day before the marathon. Of course, we hit some traffic between Baltimore and Washington, and then finding parking at the Convention Center was a pain. Eventually I had my bib and long-sleeve tech shirt and we were heading to Maryland.

Sunday morning, I was up at 5am; Yuriko's dad gave me a lift to the nearby Metro Station. On the train, I drank a 5 Hour Energy and ate a Cliff Bar. I got to the Pentagon Station around 6:45. Then I spent the next hour waiting among the mob to get through security. It was raining a little bit, but not too bad. By the time I got through, it was nearly time to start. I hit a portajohn and made my way to my "wave."

The Race: Unfortunately, my wave had already started, so I was stuck in some slow congestion. With 30,000 runners all starting within 28 minutes of each other, the first few miles around Arlington were rather crowded. There were also a couple small hills. But I found some seams and got through the first 5K with an average pace of 9:03.

During mile 5, the course crossed the Potomac River into Georgetown. At this point, the field opened up somewhat, and I didn't have to make as many lateral moves to keep my pace. (At the 10k mark, my average pace was 9:05.) As the course moved north, up towards the National Zoo, I noticed that there was about a .25 mile difference between the mileage on my watch and the mile markers in the race. I realized this meant that I was going slightly slower than the average pace indicated by my watch, which had been settling in at 8:52. I tried to pick it up just a bit, and I ended up bringing my average pace down to 9:01 (official time, not watch time) by the 20k mark.

After the turnaround point in the middle of mile 8, the course returns toward central DC. My wife and father-in-law said they would look for me behind the Lincoln Memorial, so I tried to keep an eye out. I would have breezed right by them, though, because I didn't see them until Yuriko called out my name. Seeing a couple friendly faces gave me a boost, and I kept it going as the race headed south down to Hains Point.

Right around mile 12, I approached what was, for me, the most memorable moment in the race. The group Wear Blue: Run to Remember had lined both sides of the course with images of veterans who were killed in action over the past fourteen years. The race suddenly got very quiet, as all the runners trotted along in silence, looking at the faces of fallen—so young, so many.

Hains Point was also the midway point of the race, and I picked up a Cliff gel for later. (I had already eaten a couple Huma gels which I had brought myself. I should've stuck with them--when I ended up eating the Clif gel--Vanilla--it was grossly sweet, like cake frosting.) As we headed up the other side of the peninsula, I sort of wanted to pee, but I didn't want to stop. I had been drinking water mixed with Coco Hydro since the start (I was carrying two 20 oz bottles on my UD vest), and I had taken in close to 30 ounces. I decided not to stop, and to put off stopping as long as possible. (I never did stop, and I couldn't believe how long of a walk it was from the finish line to the nearest portajohn.)

When I got back to the Mall, I still felt great as I cruised past the Smithsonian buildings and the Capitol. I tried to look for Yuriko and her dad in front of the Air & Space Museum, but somehow I missed them and they missed me.

Exiting the Mall, the course headed back to the Potomac, and I passed some lady spectator holding up a couple lunch baggies, calling out, “Peanut butter and jelly!” I grabbed one as I passed and ate it while running over the bridge back to Arlington. PB&J is one of my favorite aid station eats, and I was excited to pick up this bite when I most needed it, quite unexpectedly from an unofficial volunteer.

I passed the 20 mile mark right around this time, and I was happy that my pace hadn't fallen off at all yet (8:59 pace through the first 21 miles). Though once I finished the bridge and started the final 10k in Arlington, I could feel some pain creeping into my right knee and foot. I tried to just stay loose and keep it moving, though I could feel myself slowing down a bit around mile 22.

Dunkin Donuts sponsored an aid station around mile 23, and there were Marines there passing out little cups of munchkins. I grabbed one and ate a munchkin. How much damage could one munchkin do with only 5k to go?

And like magic, the knee pain started to dissolve. I've heard runners talk about the ups and downs they feel during long races, but in my experience, in the past, when I had started to feel bad, it only got worse. This was the first time I experienced going from bad to better. As I passed the 25 mile marker, I was actually able to pick up my pace (ran the last 2.4 miles at a 8:44 pace). At the very end, there is an annoying hill, which is really not that much of a hill (50 feet?), but of course after 26 miles, it feels pretty steep. I charged up with all I had left, making sure I got in under my goal time. (Goal: anything under 4:00; official time: 3:56 -- that's 3,349 overall out of nearly 30,000.)

Overall: It was a great day. My only bad experience was standing in that disorganized mass of people trying to get through security. Seems like there must be a more efficient way to do that, but of course I understand it must be a pretty substantial challenge with a field of 30,000 runners.